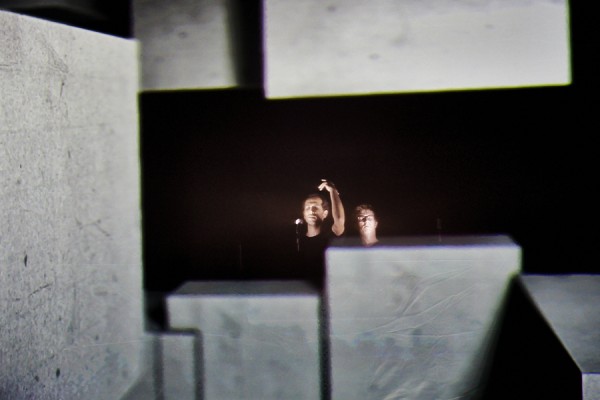 1024 Architecture are the incredible French artists focusing on the interaction between body, space, sound and image using both low and hi-tech methods. As well as performances they also create AV installations and micro-architecture. At this year’s Splice Festival, they present a performance, run an Advanced Masterclass on their software MapMapper and host a talk + Q&A called ‘Physical to Digital at 1024 Architecture’.

1024 Architecture (François Wunschel & Fernando Favier) perform ‘Recession’ – the third part of the trilogy Euphorie-Crise-Recession. An audiovisual performance, a journey through what’s left of our civilisation. The show echoes the scarcity of natural resources, diminishing of species, and the ever expanding influence of built matter. The two performers activate the digital vista in realtime, like busted puppeteers, waiting for something to go wrong.

French duo Pierre Schneider and François Wunschel both studied at the Strasbourg School of Architecture, forming 1024 in 2008 after working with French DJ/producer Etienne de Crecy on his cube staging for his live shows the previous year. Their desire, to create an enhanced vision of architecture where architects produce video performances and designers build temporary structures. The pair run counter to the rules of their industry, even producing their own software MadMapper, which they’ve used creating stage visuals for DJs and acts to lighting up tennis courts at the Bercy Open in Paris or the outside of the Théâtre des Célestins in Lyon.

As well as bombarding buildings with pixels, mapping architectural surfaces and projecting directly onto three-dimensional objects rather than flat screens, the duo also like to use all manner of materials in their performances, “we use many basic and standardised materials, often from the construction or transport industries such as scaffolding, containers, timber framework, pallets and even netting from building sites”.

Away from performances, two projects they were recently involved with were roofing for an archaeological school in France and the design of a temporary restaurant structure on the River Seine in Paris – both which they see as ‘architecture which must disappear without a trace’. It’s the exact opposite of the generally accepted fundamental mission of architecture, that of erecting buildings that stand the test of time, which they see as often limiting possibilities and creativity. “The fleeting dimension of our projects liberate us, opening things up to larger, more stimulating ideas of expression and freedom.”