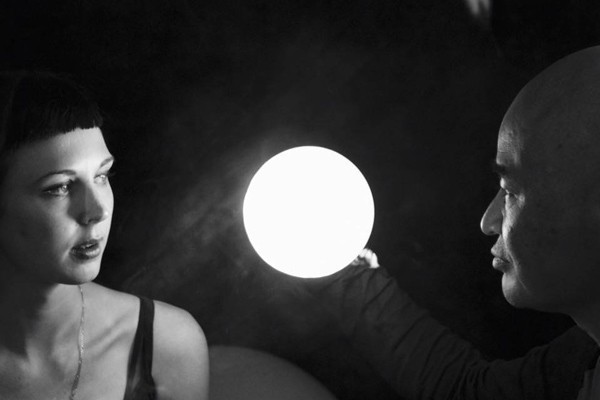 Adrena Adrena is a collaboration between award-winning visual artist Daisy Dickinson and drummer E-Da Kazuhisa, previously the drummer of the Japanese noise (or ‘Japanoise’) rock band Boredoms (WEA Japan, Reprise/Warner Brothers) and currently British electronic/post-rock band Seefeel (Rephlex, Warp Records). The duo cut a raw blend of drums, noise and organic visual work, featuring in their performances an eight foot white sphere that hangs above Kazuhisa’s drum kit and which Dickinson maps videos on to; her work was described by William Barns-Graham of Fluid Radio as ‘cosmological and transcendental, drawing attention to the wonder of the earth and our sensuality on it’.

As a duo, their debut was at the International Festival of Projections in early 2016 and have since performed at End of The Road Festival, Supernormal Festival, Fort Process Festival, Zorofest in Leipzig and other shows across the UK and Europe, with both Japanese psychedelic rock band Acid Mothers Temple (Alien8 Recordings) and members of British art-punk band Wire and Japanese noise rock band Bo Ningen (Stolen Recordings).