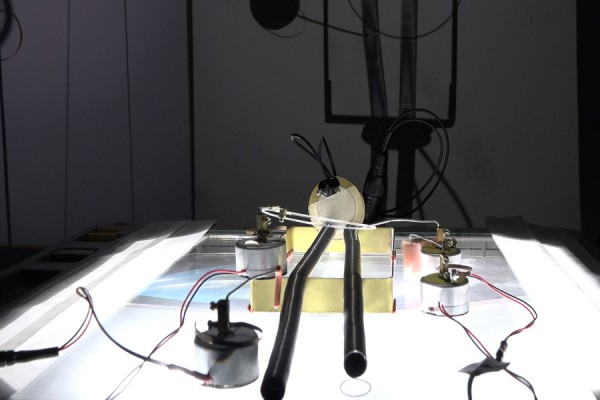 German artist Christian Faubel is an interdisciplinary scholar working in the differing fields of neuroscience, autonomous systems research and media art & design at the Academy of Media Arts in Cologne. In his work, Faubel’s interested in what enables complex behavior, and how this may result from the interaction of very simple units and their interrelations. His artistic colleague Ralf Schreiber, also from Cologne, works with electronics, solar panels, motors and miniature loudspeakers. His playful and experimental works generate gentle sounds and tiny movements, and in so doing explore low-energy transformation processes of light into movement and sound.

They make music with machines and electronic circuits that function according to their very own logic, exploring the tonality of material and the very materiality of sound. As they explain “we want to give voices to things, and do so by careful manipulation of the machines and their surroundings”. For the audience, this process is made transparent by placing the machines under an overhead projector, so that their movements cast a silhouette, a kind of ‘shadow play’. As they conclude “Similar to live coding it’s our improvisation with the machines that matters. It’s a live experimentation in search for patterns, musical structures and minimal techno that we like to dance to”.