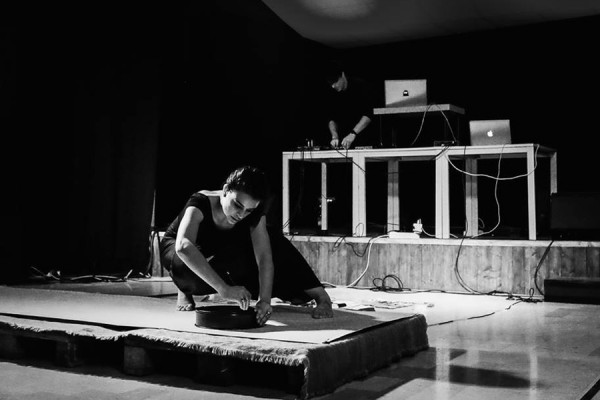 Martina Zena is an Italian digital artist who likes to get her hands dirty. With a Bachelor of Arts degree in Painting and a Masters in Graphic Art from the Academy of Fine Arts in Bologna, Italy, she secured a scholarship in 2015 to the eminent Fabrica, the research centre founded by Luciano Benetton and now very much part of the Benetton Group. Zena has exhibited her work in multiple situations and venues, and has presented her live performative projects across Italy. Her current collaboration is with jazz musician Giulio Abatangelo, who in 2010 won a scholarship to one of the much sought after ‘Umbria Jazz Clinics’ at the Berklee College of Music in Boston in the USA. Since 2012, Abatangelo has concentrated on his jazz-influenced electronic music project Klune, signed to Italian indie label Foolica Records.

For Splice, Zena performs Interplay – her third project in a recent trilogy of experiments and collaborations bringing together music, graphics and performance art. The project is based on the ‘interplay’ concept borrowed from the jazz world, where participants set-aside the usual artistic hierarchies of leader and followers in favour of interchange where every performer affects the other. During the performance, every gesture causes an amplified sound and every sound a gesture, corresponding to signs and further gestures created with unconventional objects. The sound finds its form and takes shape with the final artwork being the score of the performance!